Season 1 was the one which started it all. Every character was new and fresh in the series. However there are some which only appeared on season 1. Here they are below.

Jimmy McVeigh (Will Millar)
Seasons Appeared on the show: 1

Only seen in season one, Jimmy is the wisecracking, lovable Irish letter carrier who loves working on his boat. He always has a problem with his wife, and love to talk about his boat.  In fact Jimmy mentions in one segment that his wife up and “bloody left” since he was always working on the boat. He was disappointed because “she took the T friggin V and the VC bloody R”. His best segment, in my opinion, is the one where he gets a ceiling fan for a propeller for his boat. We only see him when Red visits him at his boat after Jimmy comes back from his route, and he is never seen at any of the lodge meetings. He’s one of my favourite characters, who I would have loved to have seen more often.


Will is an Irish-Canadian actor and musician who moved to Canada at age 10. He was the lead singer with the Irish folk group the Irish Rovers. He has done everything from writing books, to performing to having his own cooking show called "Stewed" which features a Leprechaun in a cupboard and Will drinking Guinness. He currently runs his own website dedicated to his music as can be seen here. He currently lives in the Cowichan Valley of British Columbia.


- Drives a rare three-wheeled letter carrying tricycle for his deliveries.
- Has been shown on the show to improvise things in order to craft parts for his boat.
- Stole plexiglass from a “phone box” which he felt was fair since he called up the phone company to ask where they got the glass from and they wouldn’t tell him.
- I was chatting with Red on the monthly online lodge meetings on Nov. 03/2009 and he mentioned that Jimmy moved to Victoria BC (possibly a reference to he new permanent residence). He heard the water was thicker there and apparently his boat sank.
- Ironically Will wrote a book in the 1990's entitled "Messing Around with Boats" 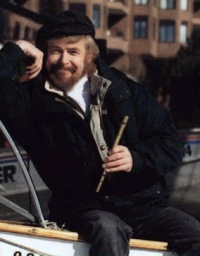 Will Millar
Jack (Tim Sims)
Seasons Appeared on the show: 1

Jack is the hermit living in a cave in the ground seen only in season one. He seems a bit off and always wears a black shirt, black toque and is armed with a hockey stick. Red is the only person who visits him at his cave. He moved to the cave as he believes that civilization will come to an end. His cave appears to be spacious as he is growing his own food, mentioned he was holding a small get together and that he had several years supplies of canned goods.

Tim passed away in 1995 and in his honour an award for outstanding comedians was created.

- Mentions that he has a wife and children.
- Was a marketing/advertising executive previously before quitting his job and moving to a cave.
- Did not recognize state owned bank notes, but would take McDonalds coupons.
Max (Max Smith)
Seasons Appeared on the show: 1

Max is the kid that Red spends quality time with in the first season. This is actually Red’s real son Max who later became a part of the show behind the scenes with a production role.