Minor Characters (Season 4 and beyond)

Like with any show, there are minor characters which help to make the show complete. The characters below are not regular characters and only made several appearances, but are very memorable to any RGS fan. Everyone included here was introduced starting in season 4 right to the conclusion of the series.

Reg is the lonely hunter who is constantly seen in the woods around the lodge. He is a former attorney in the city and moved up to Possum Lake in order to get away from the stress of work and to get back to nature and joy his passion of hunting. Despite this he is a staunch vegetarian and does not meet any meet. He does take great pride in the little shooting skills he does have.

- Mentions that he was married until his wife ran off with her tennis instructor.
- Known for making his famous clam chowder and stews over the fire in the bush. Mentioned if he ate that healthy when he was working he’d have been able to take twice the caseload.
- His gun used in the show is a .22 calibre rifle. Possibly a Cooey.
- Hunts in a camouflage outfit and bunny slippers.
- Wife left him to run off with the romantic tennis instructor
- Was the lawyer representing the plantiff against the Lodge Members in Duct Tape is Not Enough.

Joshua is a part of the local Indian tribes in the area. He is always seen in the middle of the bush complete with his cellular phone and collection of maps. He is constantly doing surveying and is a great resource to red about the lay of the land and the physical formation of the land. Despite his local heritage and education, always seems to be completely lost (or clueless).


- Ancestors owned all of the land in the Possum Lake area.
- Mentioned that he has a degree in urban planning.

Ben is the slow, dim-witted brother of Dougie Franklin on the show. He is the only other American character on the show. Dougie has sworn that their mother liked Ben more and is often harassing him about making them all look stupid during a game show style segment in season 4 when Ben hauled out cheat cards to help with the “Monet” questions, despite being given automotive safety questions.

Network Bernice also only appeared on Season 4's “The Network Deal” as a replacement for Red’s real wife Bernice. Clearly younger than the real Bernice, red had no issues with this minor change being put on the show.

Appeared in Season 4's “The Network Deal” as an on screen visual replacement for Harold, while he produced/directed behind the camera. Clearly older and more of a manly, chiseled, stereotype of 90's pop culture TV hosts than Harold himself was.

- Red hated the “New” Harold as he poked at his happiness when the deal fell through and Harold was back to his old duties at the end of the show.
- Dan is currently attempting to become a school trustee for the Kawartha Pine Ridge District in Ontario.
- Dan is also a longtime character actor who has appeared in numerous films including most recently 2010's "Kick Ass" and the baseball classic, Angels in the Outfield. Visit Dan's website here.

Garth Harble is the Possum Lake area’s original animal control officer. He is known for being proud and very unlucky when it comes to his work. Loves giving advise to people on how to deal with animals. Ended up retiring and leaving town in Season 6 while Ed Frid took over his job.

- Known for his trademark "Garth Harble here....animal control" combined with a salute to start off each segment.
- Retired after getting bitten by a toad.
Arnie Dogan (Roofer/C&W singer): Albert Schultz
Seasons Appeared on the show: 6-8

Arnie is the local roofer in the Possum Lake area. He frequently gets injured and spends a good portion of his time in and out of hospitals where he meets most of his friends. In addition, he spends much of his time with his love on country music, which he writes, sings and plays guitar.


- He has said in season 6 that he was a 3rd generation roofer where his Father and Grandfather were both in the business which started when he grandfather was in bed with a woman and he jumped up on the roof to avoid her husband who had just gotten home.
- Broken every bone in his body.

Kevin Black is the stereotypical yuppie cottager from the big city. He is a big businessman in the city known for his wheeling and dealing. He recently purchased a cottage on Bluff Point, along Possum Lake. To the locals this was revealed to be known locally as “Blood Point” as there is an over abundance of mosquitoes. Kevin is not shy of picking up his cell phone and making things happen, which puts him at odds with the locals as he doesn’t understand how business is conducted in the country (The economy debate in season 6 for example).

Earl owns the local bait shop in Possum Lake. Unlike the other members at the lodge, he has a great interest in the paranormal. He usually loves to discuss mind control and mind reading, UFO’s and other phenomenons which tends to make Red extremely uncomfortable.Many of his stories include instances that allegedly happened to him at onetime or another

Dale is one of the local teens in the Possum Lake area. He works at one of the gas stations in town pumping gas so that he can pay for college. Often gets into discussion with Red when he comes in for gas.

- Red often uses his experience in life to get the best of Dale. This is shown when he gets him talking and eventually cornered in a debate,only to distract him so he over fills his tank,giving Red free gas.

Dale talking to Red while filing the pump.

Brian Jacobs is the funeral director in Possum Lake. He is known for his dry humour more than anything and is the stereotypical undertaker.
Dwight Cardiff (George Buza)
Seasons Appeared on the show: 10, 11

Dwight has to be one of the laziest people alive and probably the only one who could give Glen Braxton a run for his money. What is interesting is the similarities they share in Marina ownership, as Dwight is the marina owner in Port Asbestos. He has a guard sloth which seems to prove that pets reflect their owners.

Charlie is the announcer from the infamous show “Hee Haw”. He returns to his childhood hometown of Parry Sound, Ontario with his family. During a segment in season 13, Red makes Charlie and honorary lifetime member of Possum Lodge.

Don with Red and Harold.

Frank is the owner of the local hobby shop in Possum Lake. But he is best known for his odd fascination with hot dog’s and wieners. He is a self defined “hot dog expert” and enjoys coming onto segments like Harold’s handy crafts to display his work.

- This character made its start for Colin at the Just for Laughs festival in Montreal in the early 2000s and several props used on its debut at JFL also found their way onto RGS (wiener hairdo for example).

Blair is another one of the locals around Possum Lake. He is a snowmobile enthusiast and known for his many accidents and crashes on sleds. From his interest, he started a snowmobiling show on the local Port Asbestos TV station. 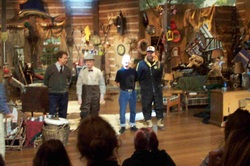 Blair in his trademark snowmobile suit with some of the guys in the lodge.
Ed Frid (Jerry Schaefer)
Seasons Appeared on the show: 8-15

Ed is the local animal control officer and replaced Garth Harbel in the 7th season. He is easily frightened, timid and excitable and like his predecessor, always seems to have the worst luck in dealing with animals which results in him getting mauled and scratched among other things. While Garth is more ignorant of animals, Ed is extremely terrified of them which helps him get into numerous predicaments with them.

- Name could have been from The Hamilton Spectator as it is located at 44 Frid Street in Hamilton, Ontario. It was also used to shoot Harold's Office scenes around the time Ed's character was brought onto the show. Being such an odd name, it most likely was used thanks to this link.

Seasons Appeared on the show: 9-15

Walter started appearing on the show after Bill had disappeared for awhile in starting in the 9th season. Not much is really known about Walter, although he does share Bill’s same love of overalls and ability to get into sticky situations. As opposed to Bill, he is athletic and young, which leads us to think he is the mirror image of Bill at his age.
Bonnie (Laurie Elliot)
Seasons Appeared on the show: 13-15

Bonnie is Harolds’ wife who married him at the conclusion of season 15. It was mentioned that they both met each other while online and ended up going on each of their first dates with each other after talking. Bonnie is similar to Harold in most ways as she is stereo typically geeky and nerdy and enjoys may of the same things as Harold. Bonnie works as a professional truck driver.